This unseasonably early, ridiculously much-too-severe-too-soon polar vortex nonsense has me thinking.  What I am trying to decide – and feel free to weigh in – is this:  Is Old Man Winter (OMW henceforth) an a-hole, or is he more of a d-bag?

I am not ready for OMW to show his sorry face around these parts.  But the evidence that he’s here and here to stay for a good spell is all there. Frost on my windows in the morning, parts of my body I forgot existed resurfacing to my awareness because they perpetually itch, energy bills that cause chest pains and frequent, loud, involuntary exclamations such as “Holy Balls it’s cold out here!”  Not to mention, a significant portion of the time my lips hurt real bad.  There is nothing to like about OMW, I tell you.  Nothing!

So on the one hand, OMW is a d-bag.  He’s never actually invited to the party, but he shows up anyway. And as much as we’d like to ask him to leave, no one ever does.  He just hangs around until we are sick to death of him, and then one day, months after he’s overstayed his welcome, he just vanishes.  But in the mean time, OMW’s douchebaggery will entail him touting to the world how cool he is, even though we all know better and secretly resent him.  Ice skating only seems magical until you actually try it and break your tailbone.  A big snow storm sounds romantic and cozy until you have to spend six hours shoveling out your driveway.  And that pot of chili?  It’s delicious, but the consequences are often severe. You’re not so great, OMW.  P.S. We all hate you.

To play devil’s advocate, though, OMW might be a straight up a-hole. He’s kind of like that uncle that shows up to Thanksgiving drunk, insults a bunch of people as soon as he walks in the door, tracks mud all over the carpet, tells a couple dirty jokes, leaves a pile of dirty dishes, starts an argument with his brother and then leaves like he’s the one who should be mad.  At the end of it all, everyone’s upset, no one really knows why, and nobody had any fun.  But the truth is, while we are all busy being mad at each other we should really be mad at him.  Screw you, OMW.  We still hate you. For real.

So all of that being said, as I dream of bathing in a vat of Curel (life-changing lotion – I really recommend you get some) and obsessively applying petroleum jelly to my lips (Chapstick is for sissies), I am reminded that things could be worse.  I could live in Buffalo. 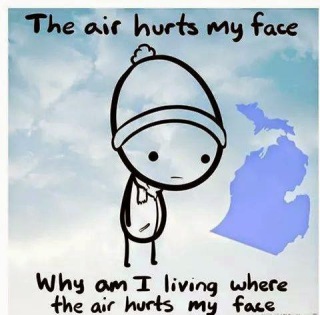