The hug I gave was to Dontre Hamilton’s mom.  Dontre is the young man who was shot to death by a cop in Red Arrow Park a little over six months ago.  There are many varying accounts of what happened that day, and I suppose we’ve all surmised our own truth by now.  My version of the truth is that Dontre was in the wrong place at the wrong time, with the audacity to have wrong skin color.  He was sleeping in park located in a segregated city and apparently that’s just not allowed.  My version of the truth makes my stomach turn.

It has also been widely reported that Dontre had a mental illness.  In my mind, there was no need to widely report this, though.  Whether or not Dontre had a mental illness was relevant to his life, but not to his death. I’ve spent many hours thinking about Dontre and his family, my heart hurting so much at times I thought it might burst into a thousand pieces. It is a situation that has been an injustice to end all injustices. It is a situation that has made me weep.

Dontre’s family, in my humble estimation, has been nothing short of inspirational.  They came to the National Alliance on Mental Illness fundraiser walk in May not even one month after Dontre’s death, banded together by their matching T-shirts and their compassion for the people who help those living with mental illness.  They have organized rally after rally to get the attention of the city’s policymakers and to promote peace and resolution. They have respectfully but firmly asked for answers of our District Attorney and the Milwaukee Police Department.  But all the while, they have attended event after event and peacefully participated.  I’m not sure I could do what they do. 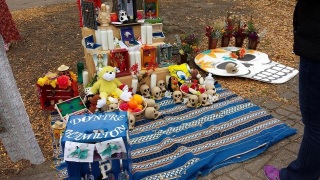 So when Dontre’s family showed up to yesterday’s Dia de los Muertos event – an event that had a special focus on those who had lost their lives to violence – it was no surprise to me.  I watched them as they stopped to take in the ofrenda that had been made to honor Dontre, hugged one another and wiped away some tears.  As I was making my way to leave the event, I felt compelled to talk to the family and say what had been on my heart and my mind for months now.

I told them how deeply sorry I was for their loss, and that their pain had been carried every day in my heart since that terrible day in April.  I told them that I had massive respect for their family, for the way they have carried themselves with dignity and grace in the wake of tragedy.  The family members I was speaking to thanked me for my words – words I’m sure they’ve heard from countless others – and pointed me to Dontre’s mother who was a few feet away.  I approached her and said many of the same things, this time adding that I work in the mental health field.  I told her that there are hundreds of people like me in Milwaukee who are working tirelessly every day to make things better for families like hers, and that no matter how big the barriers or how high the stakes, we won’t stop.  What I know, that I hope I conveyed to her, is that we won’t stop because of the Dontres and the moms of Dontres and all the other people whose lives are affected by the stigma of mental illness and its ruthless path. I know that we won’t stop, simply because we can’t.

With that, I got a grateful, tearful hug that felt like the best hug I’ve had in some years, maybe ever.  My passion doesn’t rest very often, but now I’m not sure it ever will.  It got fueled with the best inspiration I’ve had in a very long time.

2 responses to “A Healing Hug”